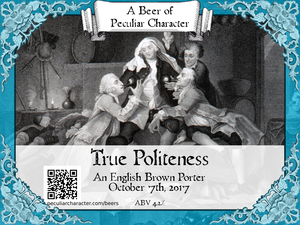 True politeness consists in being easy one's self, and in making every one about one as easy as one can. -- Alexander Pope

Porters are one of if not my very favorite beers. The history of the style fascinates me as it spans the industrial revolution and the Enlightenment. Porters have undergone at least four shifts in terms of how they were made and the resulting flavors. Despite the rising popularity of paler beers that continues to this day, porters have persisted.

Porters and stouts are closely related, to many they are indistinguishable. At least one version of beer history has stouts as originally simply stronger flavored porters. To me, the distinction is subtle but very real. I often judge a new brewery by their porter, ideally finding it to be a bit more mellow and drinkable than a stout but to still have a crisp roasty character.

This beer for me had its start with a special one off version I made for a good friend. I am very proud of how that beer turned out. As much as I love it with coffee, I wanted to also make the base beer. When I was contemplating my beer schedule for 2017 as well as looking over my current beers organized by season, I noticed a gap. I only had one fall beer.

Usually I think of stouts and porters in the winter, as a lot of people do. Currently my winter beers are a bit different, being much richer, involving styles and inspirations from the same history as porters. Given how easy drinking this recipe is, I realized it would fit in nicely to round out my Fall season.

I wanted to find an Enlightenment quote about winning, to nod to the roots of this beer. Failing to find something suitable from my usual sources, I found this quote from the poet Alexander Pope. I think a porter can be described as a truly polite beer, being easy with itself and a good yet robust beer that when done well can put everyone at ease.