Sun Dial in the Shade 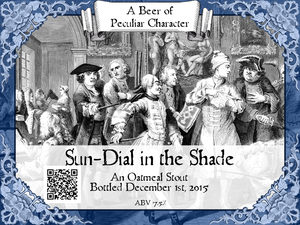 Hide not your talents. They for use were made. What's a sundial in the shade?

This is my first beer. Well, technically not. I received a Mr. Beer kit many years ago but the passion for brewing didn't take root at that time. It took hold when helping a former friend with his brewing and now has outlasted even that long lived friendship. It was the first I selected on my own and invested in.

I was, and still am, enamored on the founding fathers and was labeling my beers as "Living Proof Brewery." Naturally, I drew from quotes, especially from Benjamin Franklin, like the one above, to come up with beer names. I have always reflected on the tension between talent or skill and humility and liked the sentiment Franklin captured.

I at first thought I would make what many home brewers attempt early on, a massive, chewy, boozy stout. When I saw the recipe and the warnings about stalled fermentations and re-pitching, I revised my notion and started with a clone of Goose Island's oatmeal stout. I do add some raw sugar for a bit of a boost but the recipe has evolved to have a far more English character. I like to think early American beers would be largely indistinguishable from their counter parts across the pond.

The recipe is a bit busier than my newer recipes but I think the results speak for themselves. Despite the complexity of the grain bill, the beer has ended up well balanced with the lengthy list of malts coming through in a fairly subtle way.