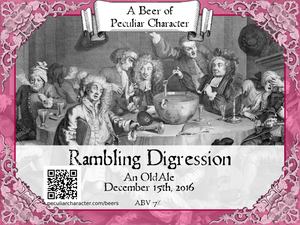 By my rambling digressions, I perceive myself to be grown old. I used to write more methodically, but one does not dress for private company as for a public ball. Perhaps 'tis only negligence. -- Benjamin Franklin

Since I came up with a mild and a bitter recipe, I wondered what else made sense. A lot of the modern history of British beer involved aged and fresh beers that were blended at the pub, by the publican. Both milds and porters either originate from this time or were vastly altered by practices and industry of the late 18th and early 19th century.

Stock and old ales were likely some form of keeping beer, historically probably a bit infected so highly attractive with the modern interest in funky and sour beers. I have not yet delved into sours so the idea of this beer is a clean but rich and dark beer. It ended up in the recipe formulation not too different from my Burton Ale which feels about right. It is less hoppy with more dark, sweetness.

I wanted to find an Alexander Pope quip on old age or aging but came up empty. The Franklin quote struck me as workable. I like the name I got from it and the first part of the sentiment, since I am known to digress, usually rambling pretty extensively on beer. I feel that my writing and podcasting has become more casual, less methodical as I get older, likely due to either a smaller audience or negligence. Either way I think I am due after a near decade of much more rigorous writing and thinking.