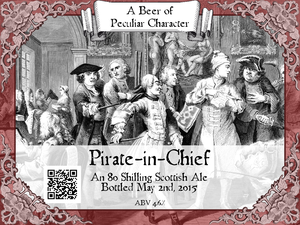 "Pirate-in-Chief" is my 80 shilling Scottish export ale. It is the first recipe I designed myself, instead of using a clone recipe as a starting point. The name refers to Alexander Donaldson. I was reading Adrian Johns' "Piracy" when I created this recipe. Donaldson, as a 18th century Scottish re-printer, played a role in the early common law around copyright. I may be overly romanticizing the man but kind of think of him as one of the first copy-fighters, trying to keep the incumbents, then the English printers, from using intellectual monopoly to exclude new opportunities and players.

This beer has a bit of a storied history. The very first batch didn't quite turn out. It was fine up until bottling but then due to a lapse in my sanitization of the bottles picked up an infection. One out of four bottles was fine but that is too poor odds for sharing. I drank the good bottles out of that batch myself and poured the rest down the drain.

The third batch had a very slow start, taking almost two weeks to actually start fermenting. I was very worried I would have to pour that batch out, too. I rocked the fermenter for a couple of days and that seemed to do the trick. I think I both under pitched and didn't fully aerate the wort. On bottling, it was a bit rough but has conditioned nicely since.