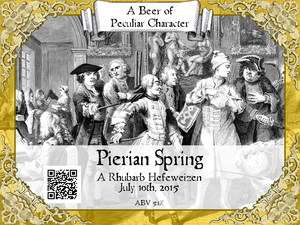 A little learning is a dangerous thing; Drink deep, or taste not the Pierian spring. - Alexander Pope

I've had the idea for this beer for a while. When we first joined our CSA, a program for communities to support local agriculture, it challenged us with unexpected produce. That first Summer we got a lot of rhubarb. We of course made pies with it but can only do that so often. It went into other pastries, like scones, and simple syrup. Andrea suggested making beer with it, an idea whose time has finally come.

I chose the Pope quote as a bit of a pun, as he was known for his acerbic wit. I almost called the beer "Acerbic Wit" which could be read literally as sour wheat but thought that was a little on the nose. Instead I chose this quote as I thought it spoke nicely to how I see this beer, as more of an experiment than my usual beers. I will prepare myself for it not turning out as I think odds are close to even. I will try to learn from any failures and refine the recipe as needed.