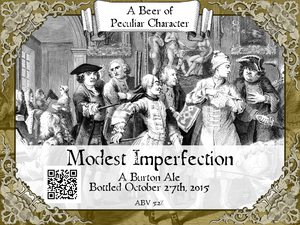 Burton Ales are a nearly extinct style that were brewed around the same place and time as the still very popular India Pale Ale. I first encountered the style when researching a base beer for my barley wine, Moderate Imperfection. I committed to laying down that bigger beer for a year before bottling but have been dying of curiosity about the base beer.

I scaled down the barley wine recipe to what would be more typical of a Burton Ale and made a few tweaks based on my brewing experiences to date. In particular, I had added a little bit of Special B to the barley wine to get some dark fruit notes that I enjoy in a good English style barley wine. I swapped that for an equivalent about of biscuit malt. I love what that toasted malt did in my English style IPA so am hoping for similar flavor contributions here.

The name is a deliberate variation on the name of the barley wine since the two beers are so closely related.