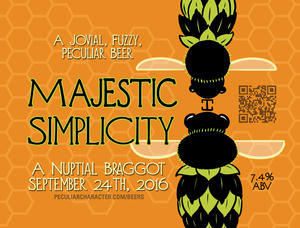 There is a certain majesty in simplicity which is far above all the quaintness of wit. -- Alexander Pope

We were all gathered in my kitchen. It had to be the largest brew day of the year so far. My dear friend Chris had managed to come out for a visit that weekend from Ohio. The beer we made was just shy of a disaster, one of the many struggles with my then new plate chiller. The time with friends was more rewarding than the brewing efforts.

During a moment of calm, we were chatting about this and that. Chris mentioned that he and his fiancee had set a date in October. They were planning a very small ceremony which he explained meant they weren't planning on inviting any of us. Perhaps there would be a large party for all the far flung friends at some later date. As an avowed introvert, I totally understood.

Moved by the milestone and my sometime habit of making beers for special occasions and dear friends, I announced I would make a beer for the happy couple. If I couldn't be there for their moment, I wanted to share something important to me with them as they started a new chapter in their lives together.

The recipe for this beer was a collaboration with two other friends of Chris', Jason and Natalie. I had the initial idea to make a braggot, a style I had been meaning to try for some time. Jason found a decent existing recipe for a start. The three of us debated how we might build on this base. Natalie suggested the Huell Melon and both of them offered great ideas for spices and fruits to try. Natalie advised that I try a couple of small test batches. Jason helped brew the final batch. He also tasted various herbal infusions dosed into the 2nd test batch to arrive at a plan for the final additions.

I thought about some quote touching on marriage or matrimony but could not quite find anything I liked. In the course of looking, I came across this quote from Pope. Chris is both a sincerely witty person but also a dedicated minimalist. I liked how the quote and the name captured my impression of Chris as an authentic, thoughtful person who values the simple in a profound and admirable way.