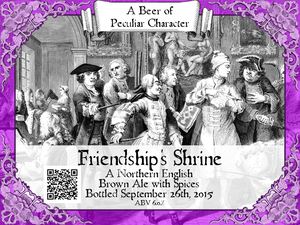 The name comes from a poem by John Hammond that I came across while researching the recipe. Randy Mosher mentions it in "Tasting Beer" appropriately enough in the section discussing brown ales.

**With my wealth they must be poor ** When all their treasure’s told;

Whilst friendships’s shrine My cot is mine, And a glass of rich brown ale.

I really like the poem and it dates to around the same time as the sources for a lot of my other beer names. While I now have a rig and process with which I can make beer entirely on my own, my very strong preference is to brew beer with friends. The name represents to me the re-dedication this year (2015) to brewing with friends, as well as brewing for its own sake.

After trying the rhubarb hefeweizen for the first time and really struggling on brew day, I wanted my next recipe to be something a little more straightforward. I figure a brown ale, especially one evocative of dessert treats roasted over a camp fire, will be very appropriate to the Fall, when I expect the first batch to really be ready for tasting and sharing.