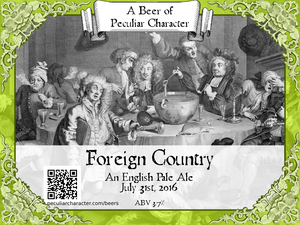 The past is a foreign country. They do things differently there. -- L.P. Hartley

If I launch a commercial brewery, it will focus largely on British styles and inspirations. This recipe is the 2nd I came up with to fill out a notional roster, the first being my mild. For the mild, I read David Sutula's book in the Classic Beer Style Series from Brewers Publications. For the bitter, I read Terry Foster's book in the same series on pale ale.

The quote was from the opening of one of the early chapters in the book. It struck me that in doing a lot more research and reading on styles and history of beer, I was very much exploring foreign countries. One could even say I was importing my recipes from those places distanced from us in time, trying to find some of what made these styles distinctive and attractive over the generations.