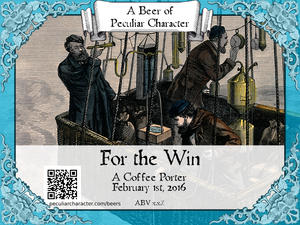 Some years back, I collaborated on a beer in honor of a mentor and inspiration of mine, Carl Malamud. That beer was made twice, one of the 2nd batch recently made its way into the hands of a friend of mine, Cory Doctorow, who shared a photo of the bottle.

That sparked a conversation and some reflection on my part. The result was the idea to brew more beers in honor of the work of friends whose work I admire. Cory seemed like a great person to start of with.

The recipe of course had to feature coffee. The plan is to feature locally sourced, amazing coffee. I plan on using Chesapeake for the first batch, then we'll see. As part of my ongoing brewing research, I heard a commercial craft brewer claim that the best way to utilize coffee is to add it, whole bean, to the secondary. I plan to do just that, spiking this porter with a half or whole pound of fresh beans.

The label is in keeping with my recent series of designs. Since the subject of this beer is not me, I swapped out the Hogarth engraving I use for my other beers with a public domain image I found, an engraving of some gentlemen in a hot air balloon. It is my meager reference to a wonderful homage to Cory in xkcd. I don't normally brew beer in a red cape and googles in a high altitude balloon but I may have done that for this one. (Not really.)