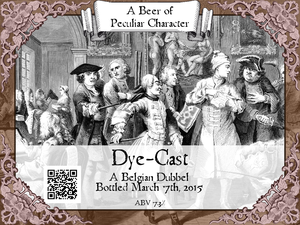 All Wars are Follies, very expensive, and very mischievous ones. When will Mankind be convinced of this, and agree to settle their Differences by Arbitration? Were they to do it, even by the Cast of a Dye, it would be better than by Fighting and destroying each other. -- Benjamin Franklin

Dye-cast was the second beer I made. I enjoyed picking a quote from Benjamin Franklin for the first and something about this quote spoke to me. What better way to encourage the peaceful arbitration he envisioned than over a tasty beer.

The recipe started life as a clone, of North Coast's Pranqster, a strong Belgian golden ale. North Coast makes a couple of my all time favorite beers and I have had Dye-cast favorably compared to one of them, Brother Thelonious.

When I was thinking about first making this beer, a new crystal malt, CaraRed, had just been introduced. I didn't know very much about malts at the time. I just had this image of a striking, red Belgian beer. In my experience since, the best red notes in a beer come from less obvious malts, often dark roasted or even black ones. Dye-cast usually turns out a muddy brown. I would rack it for clarity but as a Belgian style beer, it is well served by having a lot of that yeasty goodness in suspension.