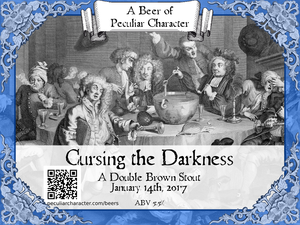 "Instead of cursing the darkness, light a candle." -- Benjamin Franklin

I started reading a blog, Shut Up about Barclay Perkins. Ron Pattinson is a historian with a special passion for Scottish beers. In addition to his travel stories and his not inconsiderable research into the evolution of recipes and the brewing industry, he posts recipes for many of the beers he finds.

I had been dithering about what to make as my final beer for 2016. First I thought I might attempt my mild recipe again since it didn't quite turn out. Then I thought I might get a jump on next year's recipes by making my non-caffeinated porter ahead of my original schedule. Then I saw a post by Pattinson about a beer called DBS.

His historical posts are filled with all kinds of odd beer or style names as was common to a certain vintage of British beers--AK, XX, XA, etc. Turns out DBS may have stood for double brown stout, part of yet a bit apart from the tradition of Scottish sweet stouts. I loved the idea of adding another Scottish ale into my brewing schedule. I retired my oatmeal stout to make room for new recipes. I traditionally ended my year of brewing with that stout so it felt sort of symmetric to try a new stout recipe at this same point in the year.

I don't expect this to be an especially dark beer given the lack of black malt but I like the Franklin quote regardless. I often think about how we make excuses for our selves in the colder months to push back the longer nights with lights, candles or otherwise. The quote has seasonal, rational and aesthetic resonance for me that just seems to fit this beer.