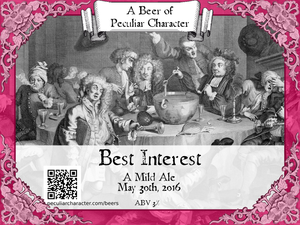 An investment in knowledge pays the best interest. -- Benjamin Franklin

As I have been thinking about the possibility of starting a commercial brewery, I have been pondering themes and concepts. Far and away the single best inspiration in my brewing has been British beer. I figured a mild ale would be an excellent addition to develop, as well as yet another historic style like the burton ale I made last year, that isn't all that common any more.

In many ways this beer, like the last few, represents the latest dividends from my investment in time, practice, and research. I thought this Franklin quote in particular was an apt source for the name as such.