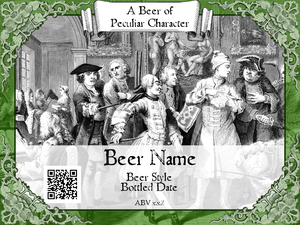 You can find pages for each of my beers here. On each page I will try to share my thoughts on the inspirations for my beers, their names, some notes on their evolution as I tinker with the recipes, and any social media updates or pictures I've shared about them.

All of my beers are on Untappd, please check in if I've managed to share a bottle with you or you received or sample one through a friend of mine.

Here are some groupings of the different beers I make to understand a few ways I think about them.

I definitely try to observe some sense of seasonality, with lighter and more refreshing beers in the warmers months and more substantial and hearty beers in the colder months. I also do some annual one off brews, usually right at the start of the year.

My current inspiration are historic British beers. Even within that realm, there are a wide variety of tastes to explore, more than I think most people realize. For those not as familiar with my beers, I thought I would also try to organize them by some sense of flavor.

Retired or On Hiatus

As my set of recipes has grown, there are some beers I have retired or taken out of rotation for the time being.

I am flattered by how often I get this question. I am exclusively a home brewer, making batches five gallons at a time in my home. Without a license, it is illegal for me to sell my beer. There are nanobreweries, effectively licensed home brewers. Thinking is mixed on whether they are viable. Common wisdom suggests a minimum size for a going brewery is out of the reach of your typical home brewing setup. Trying to produce sufficient volume overall five or ten gallons at a time is not likely going to work. Scaling to 7 barrels or more represents a considerable gap in practical knowledge as well as capital expense for gear and operating expense for materials and space.

I may one day open a commercial brewer, though it is far from certain. I am pretty happy as a home brewer and there is still so much for me to learn.

What you can do is receive beer from me as a gift. Contact me directly if interested to learn more. I do ship beer around the US to friends though any help with the costs related to shipping is greatly appreciated. Dedicated 2 bottle shippers cost me about $7 and I have to order at least five shippers at a go. Shipping varies between $15 to $20 depending on where the "liquid yeast samples" are going.