The final six pack of this year's beer advent calendar had a couple last beers with lactose that I skipped. Liam tried the first one, his only comment was it was a bit boozy, and the other is still in the fridge for him to try. The remaining four beers were a pretty good representation of the entire case, a nice way to wrap up the month of beers. The beers I was able to enjoy ranged from seasonal to on trend, old favorites and new to me, and one delicious curve ball. 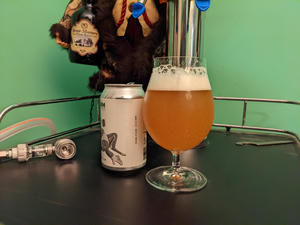 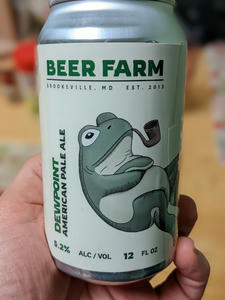 The first beer I was able to enjoy out of the final six pack was from another local favorite Brookeville Beer Farm. My only professional collaboration project was with the wonderful head brewer there (and dear friend), Kenny. A Pleasant Country is a delicious, barrel aged beer based on an old home brew recipe of mine and that I've had the excellent opportunity to help brew several times. Kenny is another skilled technical brewer and Dewpoint, a modest pale ale, was delicious. I try to get up to the farm every month to enjoy the breadth and depth of the quality beers he makes. I love sitting under the pergola on a beautiful day, ordering one of their delicious pizzas, and whiling away the afternoon nibbling, tasting wonderful beer, and either people watching or writing.

I loved how this beer offered both a bit of the current trend and some classic flavor notes. As you can see from the picture, the beer is hazy as many modern IPAs and pale ales are. I got strong citrus and resin from the aroma and both carried through into the taste. The citrus on the palate was sweeter, reminding me more of the flesh of the fruit than the zest or the pith. The mouth feel was a little lighter than I was expecting from the appearance. As the beer warmed, it revealed more of its old school DNA, the piney resin became a bit more pronounced. Together with a nice level of carbonation, the finish ended up clean and something I look for in this style: drinkable. Honestly, I gravitate towards drinkable beers in general, nice when I encounter one in a blind case like this. 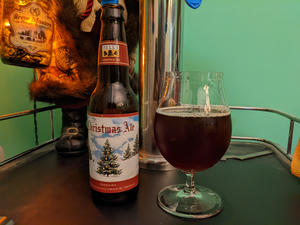 The next beer was another holiday appropriate selection, Bell's Christmas Ale. This beer was another lovely, brown beer; brilliantly clear with a wonderful dark mahogany color. I noticed hints of garnet when tilting my glass and peering through the meniscus, right where the beer meets the glass. The aroma matched the appearance well, offering a rich, malty hit of booze with a bit of estery fruit and sweetness from the fermentation character. On the palate the malt was even more pronounced, nicely masking the high alcohol content. The beer became more and more delightfully chewy as it warmed. This beer had a nice bit of structure to it, important when dealing with sweetness from the malt, the alcohol, and the fermentation byproducts. For a beer north of seven percent alcohol by weight, the structure and a medium level of carbonation helped produce a strong finish leaving room for another, if I had had one. 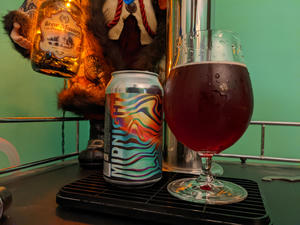 I think everyone was surprised by this next one, not actually a beer. Jennifer, who organized the calendar, said the person who picked this cider honestly thought it was a beer. I was not complaining after enjoying Ghost Fleet from Vanish earlier in the case. Whoever is leading production at Vanish clearly knows what they are doing. Midnight City was phenomenal, offering not only a balanced, enjoyable base cider but also featuring lovely notes from the blueberry skin and black currant. I am a sucker for black currant, this cider used its tartness well, along with a bit of structure from the cider apples and the fruit skins. The finish was dry yet refreshing.

Jennifer seems open to cider for inclusion next year. If any of the friends she invites picks another cider anything like this one, I am entirely on-board. I even was able to share my enjoyment of this beer with Andrea. Cider is far more her thing than beer, despite what I shared in an earlier post about her amazing palate. She doesn't tend to go in for sweet ciders, preferring drier ones and always on the lookout for interesting flavors. We now know to keep our eyes peeled for this and other ciders from Vanish. 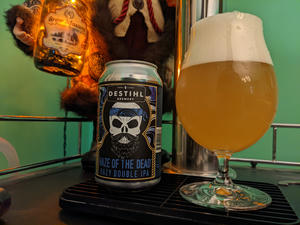 The last beer I was able to enjoy was Destihl Haze of the Dead, a hazy IPA loaded with pine and fruit. The fruit character came across as pineapple to me, a flavor I love, and complemented the pine notes nicely. Those carried through from the aroma to the taste and grew stronger as the beer warmed. The mouth feel was as expected, soft and round. This was the only beer where I picked up some hop burn. Too much green matter in dry hopping and/or not enough conditioning time between dry hopping and packaging can impart a harsher vegetal note. I didn't find the burn that off putting and had I picked up a pack of this on my own, would have given the remaining cans some time in hopes the burn would condition out. Despite that, the finish was clean and I found this beer, like pretty much all of the rest of the hazies the group picked, to be immensely drinkable.

I really enjoyed this whole experience. I hope to be invited back next year. Odds seem good. When I am, I will enjoy journalling each day as it goes. Regardless, I was grateful for the chance to invest some more in my tasting journal. I hope you enjoyed these write ups, feel free to let me know by email or social media.