This is the second write up of the beer advent calendar I joined this year. If you missed it, here is the first part, covering the first of four six pack's worth of beer. That post also explains a bit about how this kind of fun works, if you are not very familiar. I only drank half of this next six pack. Two of the beers were not vegan so I gave them to my son to enjoy. I gave him a third, one that was the only duplicate out of the entire case. I wrote in my tasting journal about the beers I did try. I will try to do Liam's impressions of the two lactose beers justice.

Late in the Summer of 2020, Andrea and I took the plunge and adopted a whole foods, plant based diet. Same one that Bill Clinton and Kevin Smith follow, for similar reasons. We will share a lot more of our story in a podcast we are working on and hope to launch early in the new year. When it comes to beer, I now try to avoid lactose. I am not certain that milk sugar will affect my heart health the same way as animal protein. I figure better safe than sorry. Lactose is not very common, outside of a few specific styles. Brewers use it when they want more residual sweetness or mouth feel than they can achieve using only the malt derived sugars usually in beer. Yeast cannot consume lactose, basically it is too big and complicated compared to other sugars. Beers with lactose have all of the milk sugar added by the brewer still in them. 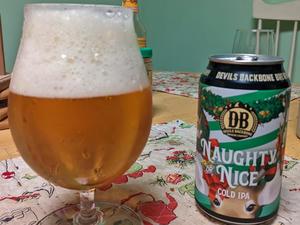 The first beer of this six pack, Devils Backbone Naughty or Nice, was my first of a new style. Some brewery out west created an IPA brewed at lager temperatures, possibly with a lager yeast, to try to push the super dry, hop driven West coast take on IPAs forward. I honestly don't recall if the brewer in question was specifically reacting to the recent hazy interpretation popularized by breweries in New England. Regardless, I enjoyed this one, finding it similar in a pleasing way to the last beer of the prior six pack, a very hoppy lager.

This IPA had considerable less malt character, effectively zero. I could not detect any fermentation character, likely by design. The pleasing part of the taste was that there were decent fruit notes once the beer had a chance to warm a bit. There was some alcohol sweetness that helped boost the fruitiness. The hop character overall was a bit more old school; I got plenty of citrus and resin. The bittering was clean and did not linger in the finish yielding a very drinkable beer for just over seven percent alcohol by volume.

The case include two cans, both of them in this six pack. My notes show they were on two successive days, though I may have taken that down wrong. They may have been separated by a day. Pretty good for an entire case of beers selected by a mix of friends and strangers--I only know a few people in the group. Liam enjoyed the duplicate can. He isn't usually a fan of IPAs. His sole note was that he found this one a little boozy.

A Hit and a Miss

Liam is a fan of sours, even lactose sours. I am pretty sure he enjoys them because, like his mother, beer isn't his first choice. He has tried some stellar sours through me. Even though he prefers this very accessible style, he has a pretty sophisticated palate. He also gets that from his mother. Andrea is a super taster, part of my theory as to why she doesn't care for beer. In her words, "Tastes like beer." I don't think either of them is motivated to work through the extra effort to train their palates to overcome the bitter aspect of beer to be able to enjoy more of what hops bring to the party. I've tried to persuade Andrea and I recognize she would have a harder time being so much more sensitive to bitterness.

Flying Dog Dark Berry sour was right up Liam's alley. A well made sour with a bit of structure, not all fruit and sweet. He was less of fan of the other lactose beer in this six pack. I have only had one Hardywood beer, the one they made for Savor a few years back. They generally seem to have a positive reputation so I was a bit disappointed I couldn't try this one, even if it was a style I generally avoid, pastry stout. Liam does take after me on that point; he found this one too sweet and definitely too boozy. 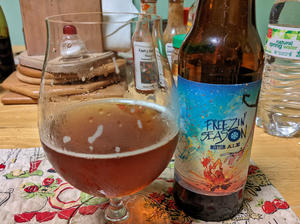 This six pack included the first repeat of a brewery in the case, as well as of a particular beer. Remember, each beer was picked and added by a different member of the group. Repeats or any other patterns were pure coincidence. The next beer was also from Flying Dog.

Unlike the sour, I could drink this one, Freezin' Season. I am ambivalent about Flying Dog. I was a fan early on, when there simply were not many locally made choices. Even though brewed locally, Flying Dog started in Colorado, years ago, so they deserve some local love but these days I favor breweries that are entirely home grown. The brewery's leadership has made some odd choices, too, over the years, like withdrawing from the Brewers Association a while back. They tend to push the envelope with their beer names and marketing, which has gotten them into legal trouble. They tend to turn that into free publicity, evincing a love of free speech. Maybe that is authentic, I haven't seen much evidence to suggest it is anything other than marketing, really. Personally, I enjoy breweries that let their beer do more of the talking than their particular spin on marketing.

I may struggle with the company, I do really enjoy their beers. Their winter ale was no exception. The beer started off rich and sweet, aided by a healthy amount of alcohol. There was enough structure from malt derived tannins to help balance the sweetness and higher alcohol. The higher level of carbonation helped scrub the palate resulting in a warming and surprisingly drinkable beer. 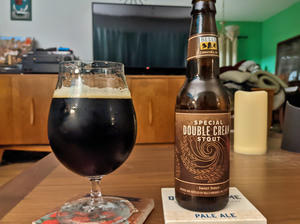 I really wish every beer with lactose shared that fact somewhere on the label clearly and simply. I had to look up this next beer to make sure I could have it, despite the name including the word, "Cream." Bell's Special Double Cream Stout thankfully has no lactose. The excellent technical brewers at Bell's managed to get a wonderfully silky mouth feel with barley and other grains alone. They managed to evoke some wonderful flavors, too. Not only the dark chocolate and coffee often found in stouts, I had to think for a bit to put my finger on it. This beer was dark, near black, even when tilting the glass to peer through the meniscus. Eventually I identified the flavor as chicory. I've had beers with chicory before and this one pulled it off well, especially since it had none in it as far as I know. The flavor was subtle enough I had to really spend some quality time to perceive it then rack my brain to identify it.

That chicory flavor lingered especially in the finish. If I had to guess, some dark or black specialty malt or blend of malts was responsible. There was a decent drying astringency to the finish as well. This beer had a rich mouth feel, together with the overall sweetness, it could have made the beer less drinkable. The attention to the finish helped balance out the whole experience.

Halfway through the case, I felt thrilled at the great variety the group had managed to produce through random chance and individual selection. I had a lot of fun journaling the beers out of this six I could enjoy. I managed to keep that up through the rest of the case. Sadly, there were a few more lactose beers in the second half. And plenty of other delicious beers I could enjoy as well.